We are really sad to learn of the passing of Mick Jenkins who was best known as ‘Jenks’, and was the physio at Sheffield FC under managers Chris Dolby and Curtis Woodhouse. 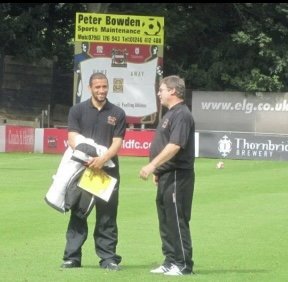 Mick was part of a very successful period at Alfreton Town where the club progress from the NCEL to the Conference North. Mick then following Chris Dolby to Sheffield FC where he became 1st team physio.

Jenks joined Chris Dolby and Gavin Smiths back room team during the 2007/2008 season and instantly became well loved amongst the team.

Mick was part of a very successful period at Alfreton Town where the club progressed from the NCEL to the Conference North. Mick then followed Chris Dolby to Sheffield FC where he became 1st team physio.

Sheffield FC chairman Richard Tims said: “Jenks was so down to earth. He was a very funny guy but you would never mess about with him because of his physique.

"He was an absolute legend at the club. He knew the game inside out and went over and above the call of duty to get the lads fit.”

Mick is survived by his wife Jane, his step-son Matt and his three grandchildren.

His funeral will take place at Hutcliffe Wood Crematorium next Monday, March 8, at 11.30am.

Due to the pandemic, attendance is strictly limited, but anyone wishing to watch the service online should contact Co-op Funeralcare on 0114 276 0211 for details.