In 1855, members of a Sheffield cricket club organised informal kick-abouts without any official rules.

The inaugural meeting of the club took place on 24 October 1857 at Parkfield House in the suburb of Highfield in Sheffield. The original headquarters was a greenhouse on East Bank Road lent to them by Thomas Asline Ward, father of the first club president Frederick Ward, and the adjacent field was used as their first playing ground. Initially, Sheffield FC games were played among club members themselves and took the format of “Married v Singles” or “Professionals v the Rest”.

Creswick and Prest were responsible for drawing up the club’s rules of play, which were decided upon at the club’s AGM on 21 October 1858, and published the following year. They were referred to as the Sheffield Rules, and were the first detailed set of rules of football to be published by a football club (as opposed to a school or university). At the time, before the formation of the Football Association (FA), many different kinds of football were popular in England. For example, each of the various public schools played football according to their own individual rules, and these varied widely. The Sheffield Rules were later adopted by the Sheffield Football Association when it was formed in 1867

Sheffield’s near neighbour, Hallam FC was formed in 1860 and in the same year the two clubs first met each other in a Local Derby which is still contested today.

They became members of The Football Association on 30 November 1863 but continued to use their own set of rules. On 2 January 1865, the club played its first fixture outside Sheffield against Nottingham playing eighteen-a-side under Nottingham Rules.

By this time the club had decided only to play teams outside Sheffield in order to seek a bigger challenge. On 31 March 1866, Sheffield played a ‘London’ team under FA Rules at Battersea Park. The game, played as an eleven aside, was won by London by 2 goals and four touches down to nil. However, the matter of Rules being disputed around the country was solved by the adaptation by Sheffield FC of the FA rules in 1878. 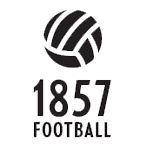 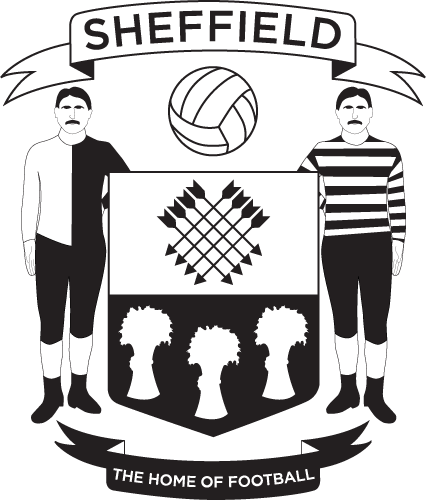 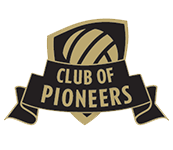 Take a look at our new home and away kits, available to purchase from the online shop! 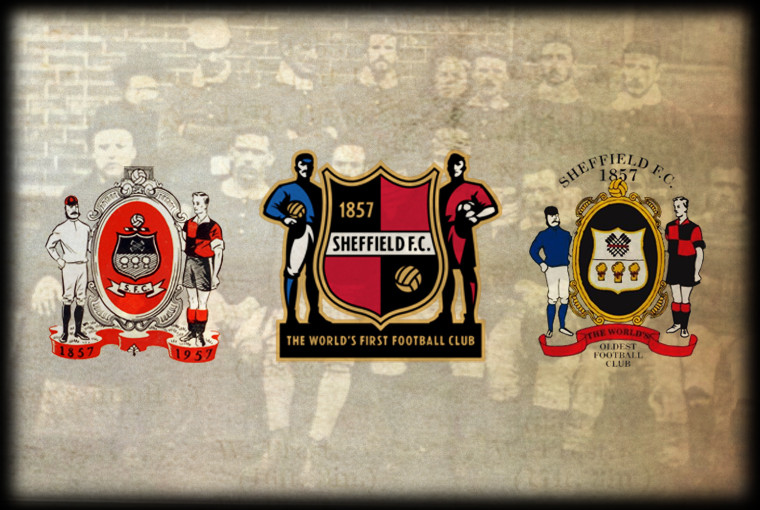 1857The First Team of The World 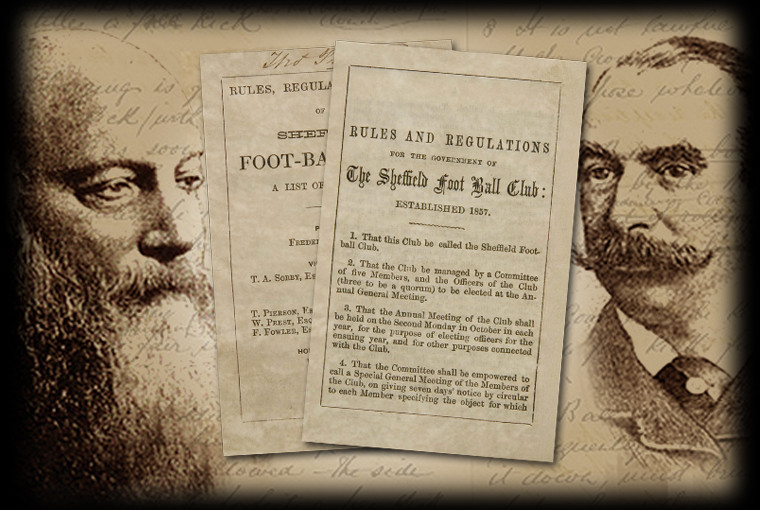 Starting with the foundation of the club in 1857, the club’s committee studies the various rules and codes of ‘Mob Football’ which was often played at universities. After two years of experiments and debate they lay down their own set of standardised laws, which become the foundation of today’s modern game. Written by Nathaniel Creswick (left) and William Prest (right), the Rulebook of 1859 is the first official set of rules and laws for the game of football and defined the inventions of a corner kick, throw-in, free-kick, cross-bar and fouls. 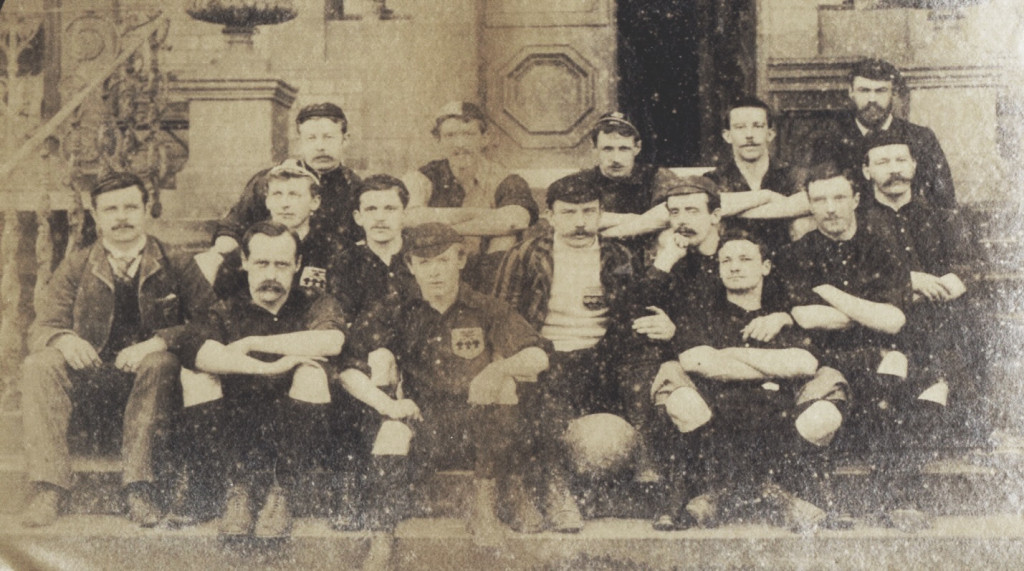 On Boxing Day in 1860, Sheffield FC plays the first inter-club game against Hallam FC at Sandygate Lane, thereby becoming the first and oldest local derby in global football. Sheffield FC won this match 2-0. This legacy has lived on ever since, with both clubs competing against each other in a friendly match at amateur level every year. 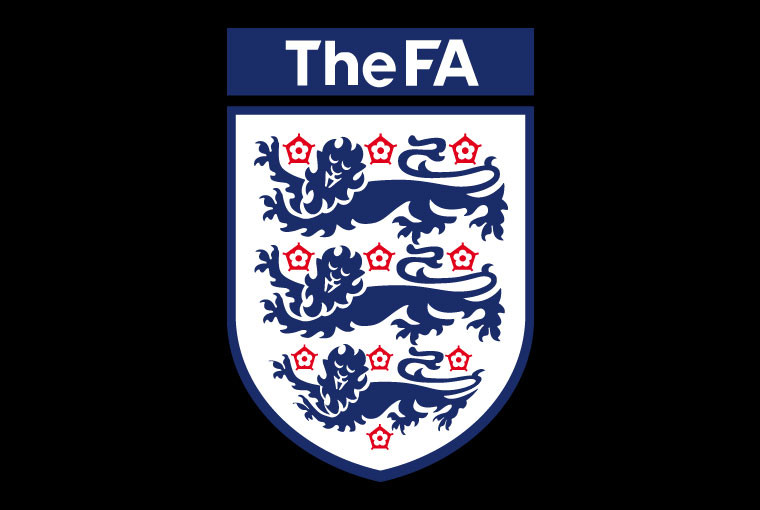 Sheffield Club members are instrumental in the formation of the English Football Association. 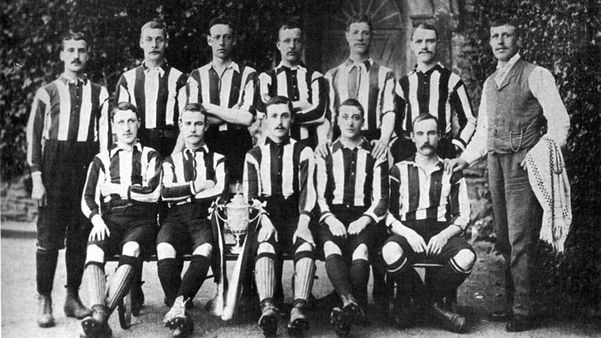 First out of town match when Sheffield travel to play Nottinghamshire at the Meadows Cricket Ground. The Club won the match with the only goal of the game. 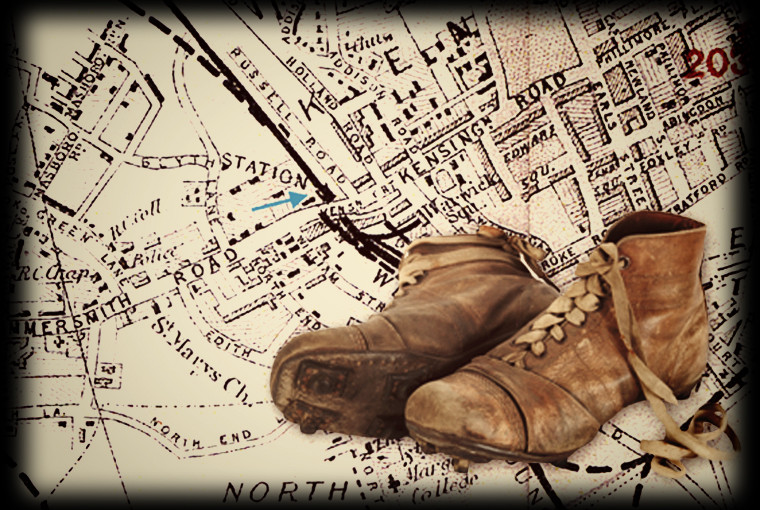 The Club plays its first inter-city match with London City at Battersea Park. The sight of the Sheffield players ‘butting’ the ball with their heads reduces the London players and fans to fits of laughter. Heading is born. (picture: map of Battersea Park). 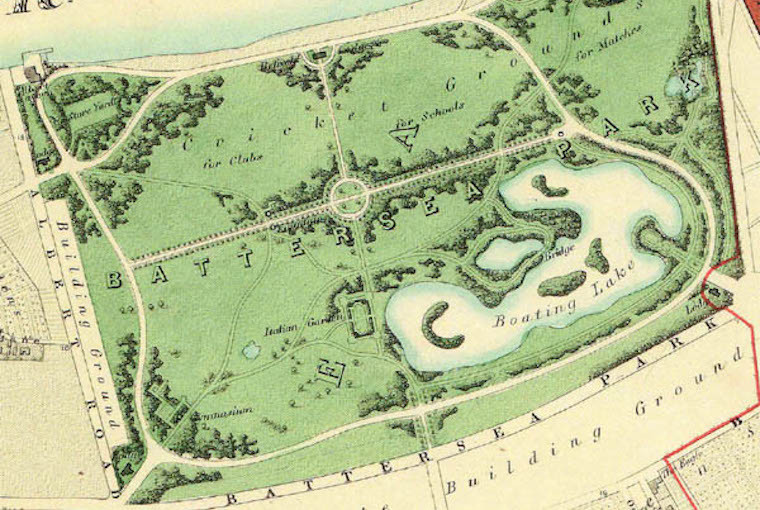 Sheffield travel to play their first game under the London FA Laws, losing 2-0 at Battersea Park under the unfamiliar rules, which included touchdowns. The Sheffield Rules had seen the invention of heading in the game and the sight of the Sheffield players 'butting' the ball with their heads reduces the London players and fans to fits of laughter. 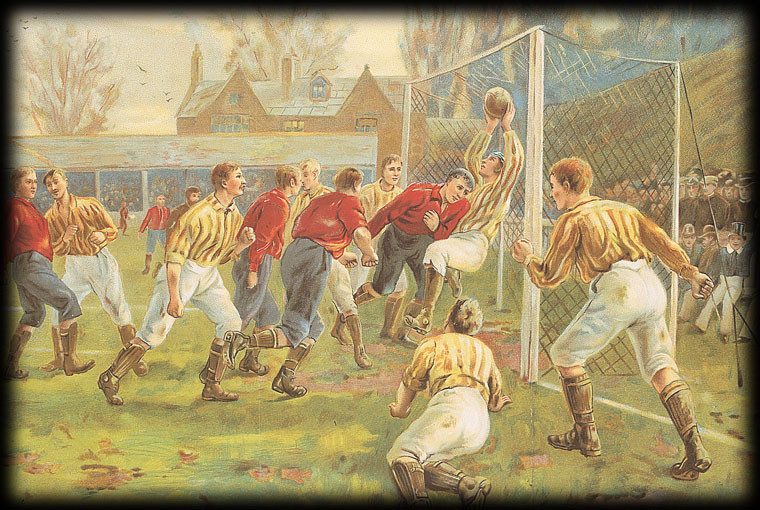 The world’s first football tournament, the ‘Youdan Cup’ was played under Sheffield Rules in 1867.

Sheffield FC's Club Secretary William Chesterman travels to London with a letter of support for the FA to continue their work as they propose dissolving the organisation at their 1867 annual meeting. 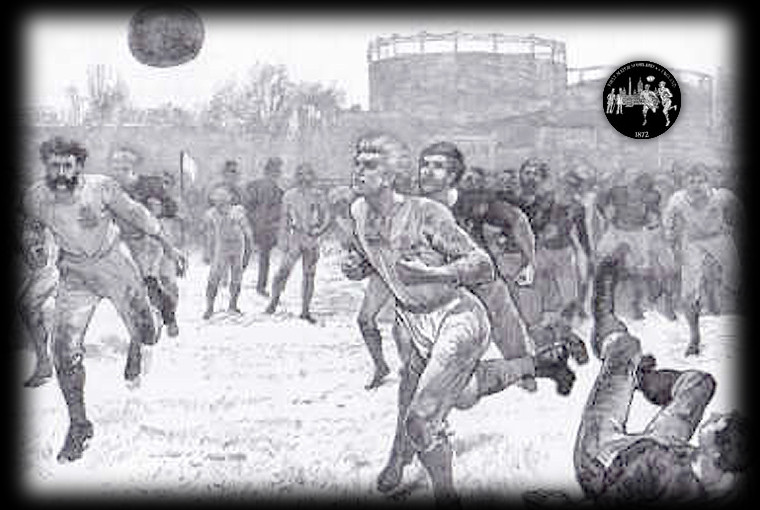 Sir Charles Clegg, also known as the ‘Napoleon of Football’, a regular feature on the Sheffield FC team sheet and one of the club’s greatest pioneers, plays in the first international match between England and Scotland. In 1890 Sheffield’s famous son becomes chairman of the FA. 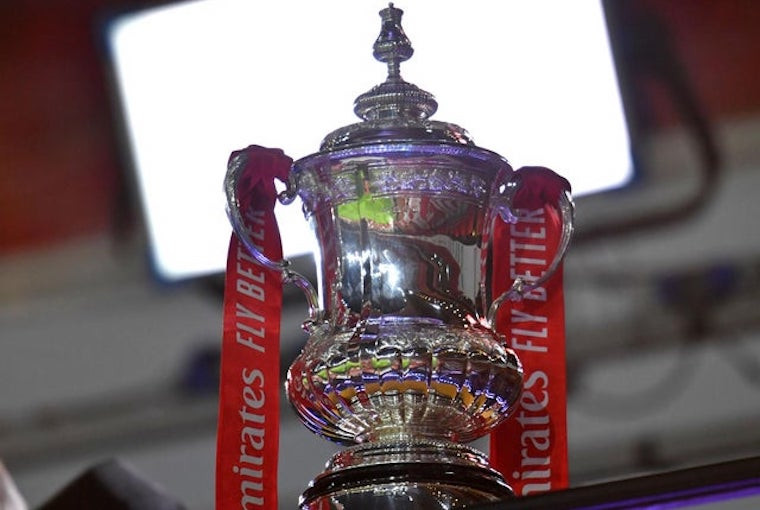 1873Sheffield play in the FA Cup for the first time

Over the next 5 years they would reach the Quarter Final stage 3 times as their support saw the competition triple in size and grow from a London cup to become a national competition. 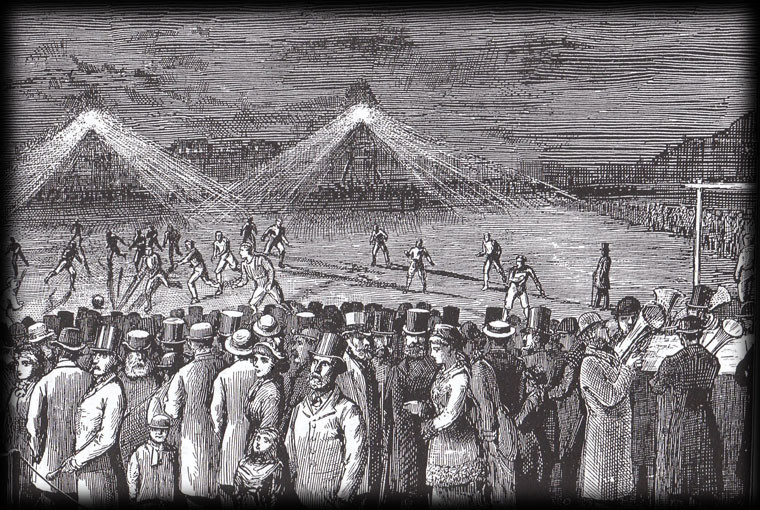 On October 14th, Sheffield’s Bramall Lane ground hosts a match between two sides pulled from local players. It was the first match in football history to be played under floodlights. The experiment in night-time football was a great success, with approximately 20,000 people attending the legendary match at Bramall Lane, now the home of Sheffield United FC. 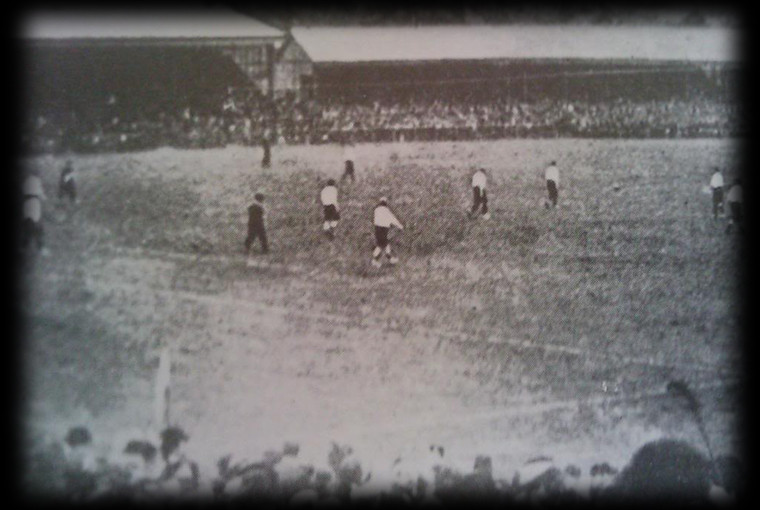 Its decline from the top echelon of football began with the introduction of professionalism in July 1885, with the amateurs of Sheffield failing to compete with professional teams; losing heavily that year to Aston Villa, Nottingham Forest and Notts County. After the legalisation of professionalism, Sheffield FC suggests to the FA the creation of a cup exclusively for amateur clubs – namely the ‘FA Amateur Cup’.

Sadly, in this year, on February 10th, William Prest dies, at the age of 52, from a fatal seizure due to a ruptured blood vessel. 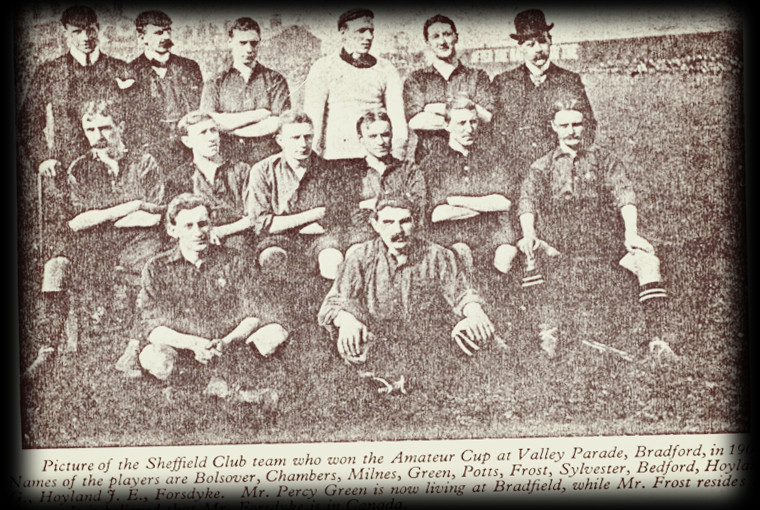 Sheffield FC celebrates their finest hour by lifting the Amateur Cup. The team won the final against Ealing, 3-1, with a crowd of 6,000 supporters seeing Sheffield’s historic victory. 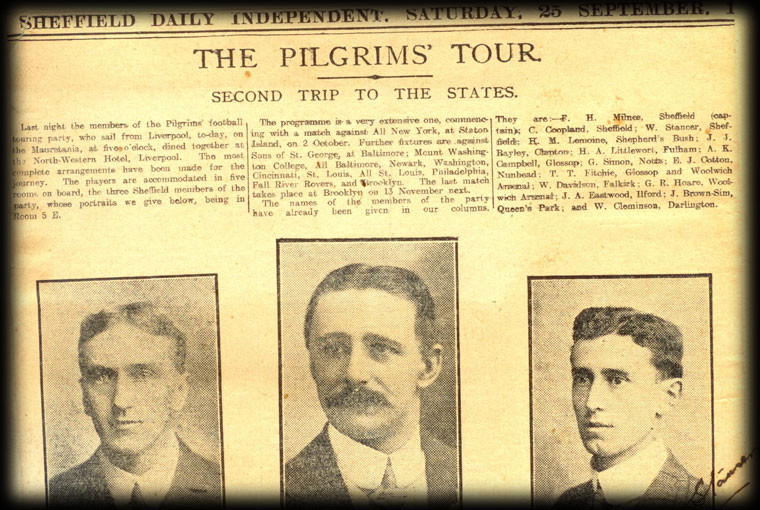 ‘The Pilgrims’, an amateur representative team, tour the U.S. and Canada. Frederick Houghton Milnes, a talented and well-known Sheffield amateur player, was involved in that first tour. Milnes was part of the Sheffield FC team that won the FA Amateur Cup in 1904 and was subsequently the moving spirit behind ‘The Pilgrims’.

It was reported that ‘The Pilgrims’ were specially selected by US President Theodore Roosevelt, who was conducting a campaign to eliminate brutality from American college football by increasing the popularity of soccer. ‘The Pilgrims’ tour of 1905 represents the first serious attempt to popularise association football in that country. 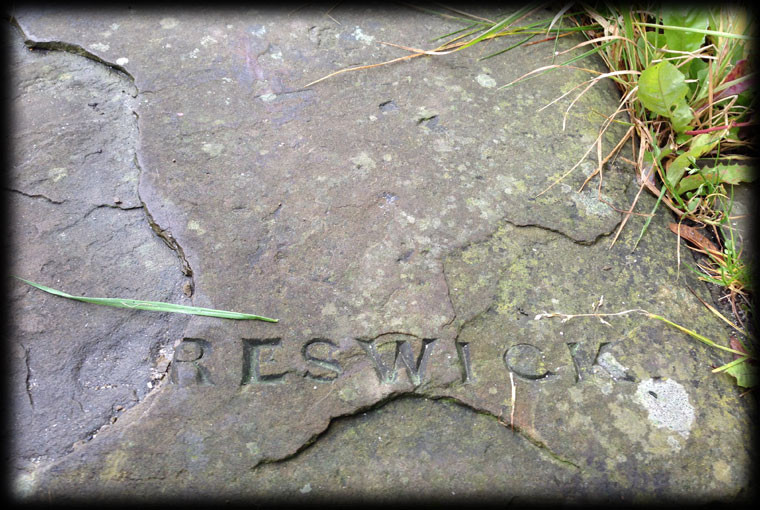 At the age of 86, Nathaniel Creswick dies, in the month of October, exactly 60 years after his gift to football, the legacy of 1857. 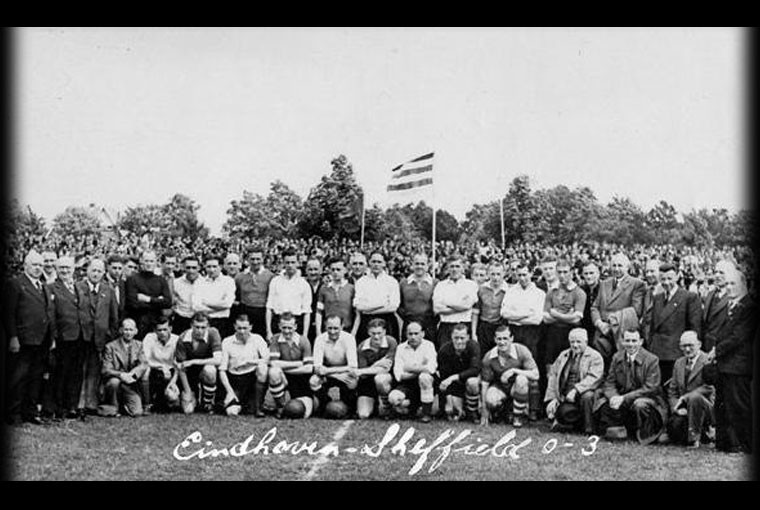 In June 1946 Sheffield FC travels into Europe to play a friendly against FC Eindhoven. Sheffield won 3-0 against Eindhoven and a trophy from the encounter is still in the hands of the oldest club.

Since their first trip to the Netherlands in 1894, Sheffield FC has played a few games against Eindhoven. The games between the two cities were arranged through the Sheffield-Eindhoven branch of the Anglo-Dutch Sports Association – formed to develop relations between the two countries through sport – and the Sheffield and Hallamshire County FA. 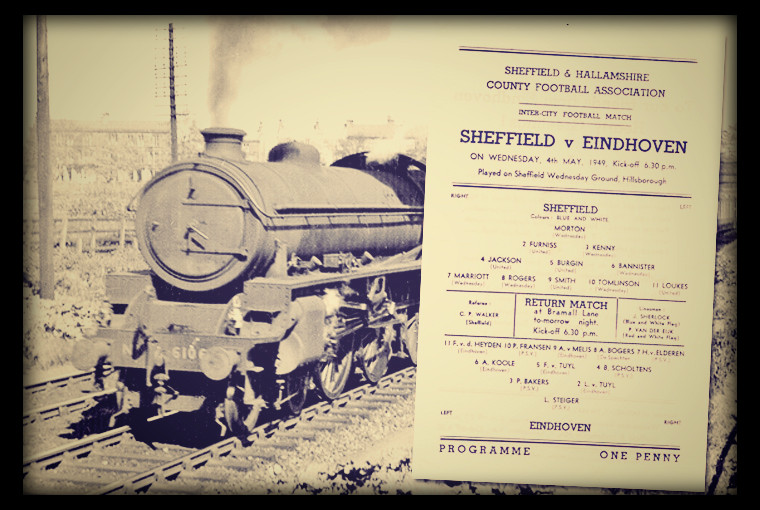 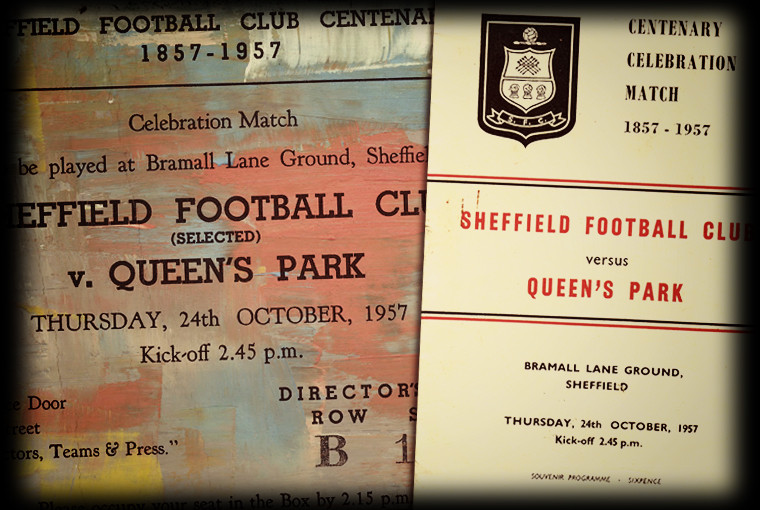 1957The Club Celebrates their Centenary

The Club celebrates their centenary at the Cutlers Hall, attended by HRH The Duke of Edinburgh and Sir Stanley Rous. Furthermore a Centenary Celebration Concert featuring Lonnie Donegan had been organised to entertain and engage the citizens of Sheffield. 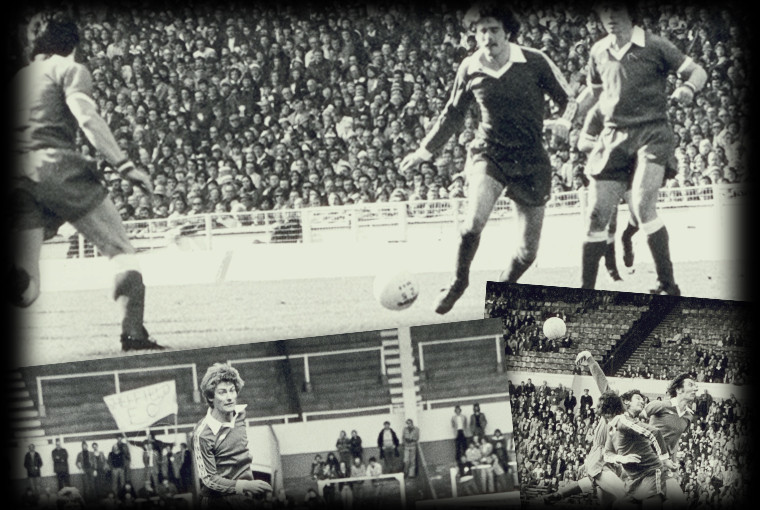 Sheffield FC appears for its first time on the hallowed turf at Wembley in the FA Vase Final, drawing 1-1. The club lost 2-1 to Billericay Town in a replay at Nottingham. 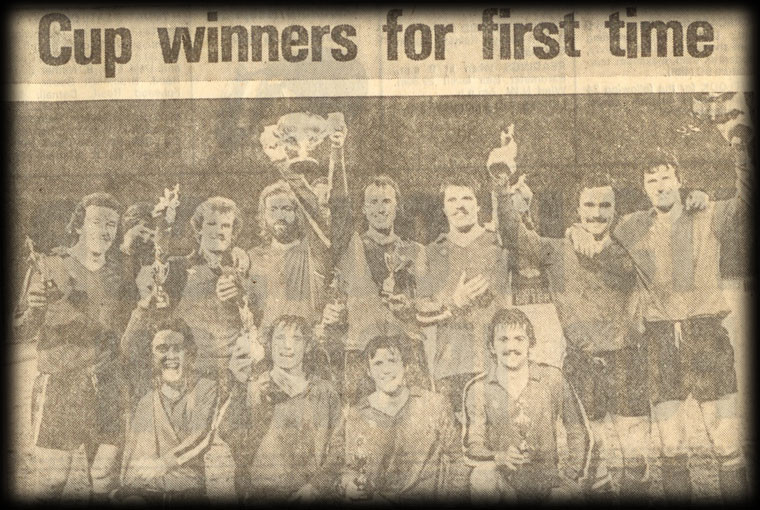 A year later, Sheffield FC wins the Yorkshire League Cup with an emphatic 4-1 victory over Maltby. 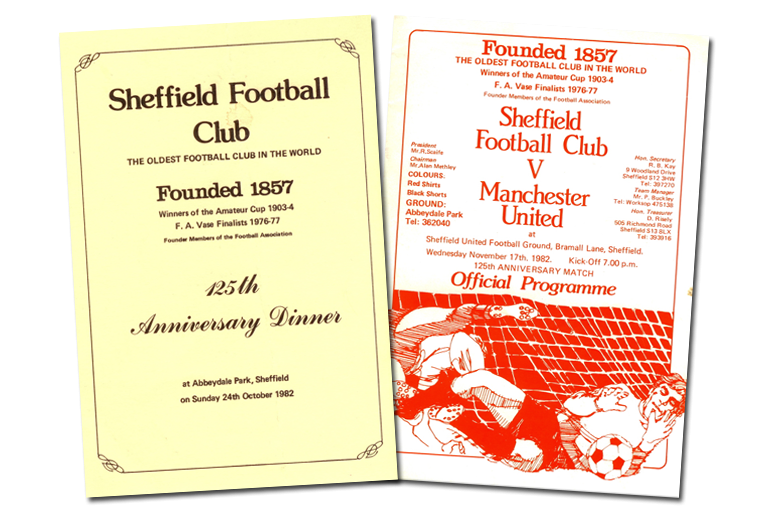 For its 125th anniversary, Sheffield Football Club holds a celebration dinner and plays a friendly match against Manchester United at Bramall Lane. 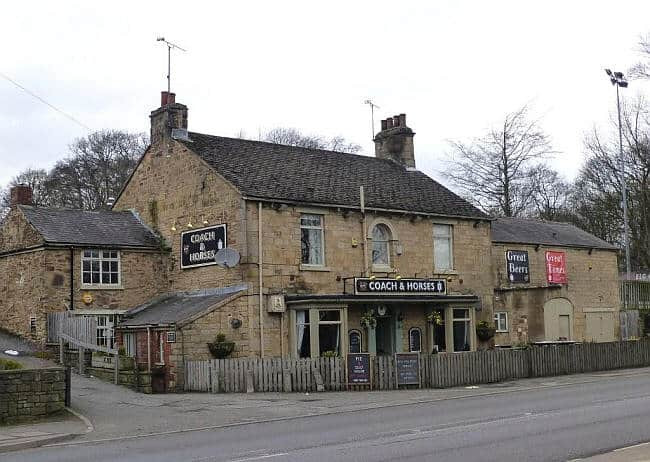 2001Sheffield FC has its own ground

For the first time in its history, Sheffield FC has its own ground! The Coach and Horses pub with an adjoining pitch and land in Dronfield is purchased for the purposes of developing a stadium. The ground is now also known as the ‘Home of Football Stadium’. 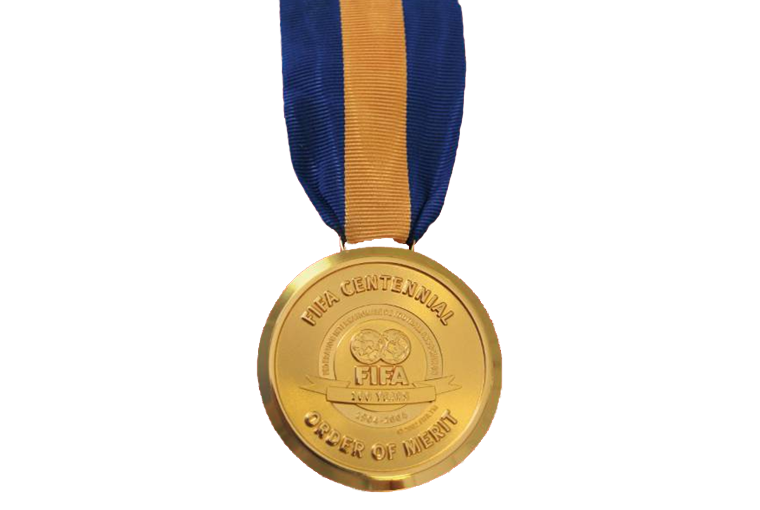 Sheffield FC is recognised by FIFA, alongside Real Madrid, with a ‘Centennial Order of Merit’, for services to football and credible maintenance of the club’s values: Integrity, Respect and Community. 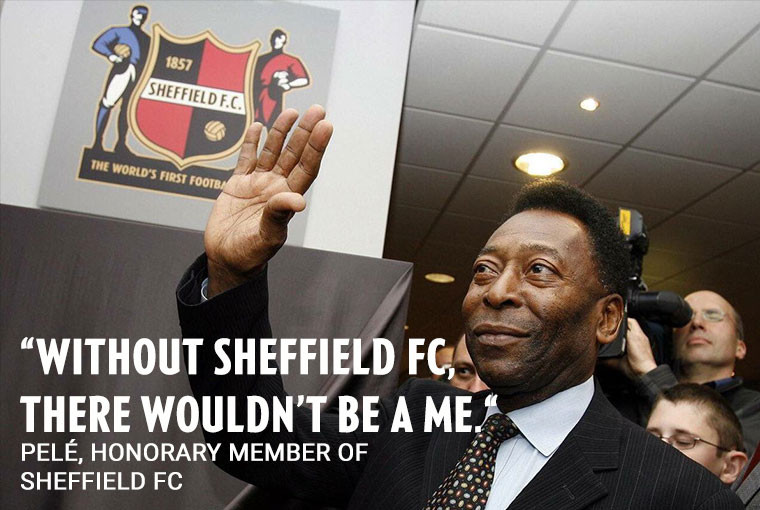 The club celebrates its 150th anniversary with a “Service to Football”, attended by many famous and celebrated gentlemen from the global football community, all celebrating this legendary day together with Sheffield Football Club.

Amongst others, Pele, Sepp Blatter and Sir Bobby Charlton joined the anniversary dinner in Sheffield.

World famous sides Inter Milan and Ajax send teams to play as part of the celebrations, and the year also sees Sheffield gain promotion to the Northern Premier League, where they have played since. 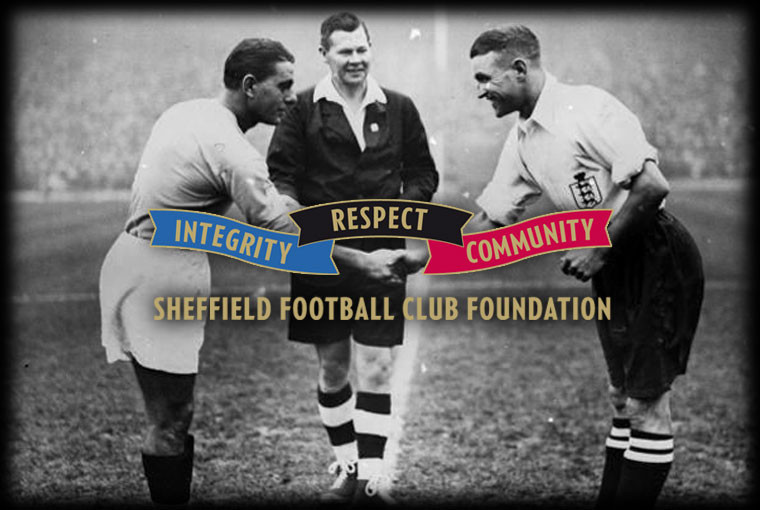 To preserve the heritage of Sheffield FC and the nature of football, the club inaugurates its own foundation in 2010. The Sheffield FC Foundation will never invest in future players, but in different local and global projects to spread the true values of the game: Integrity, Respect and Community. 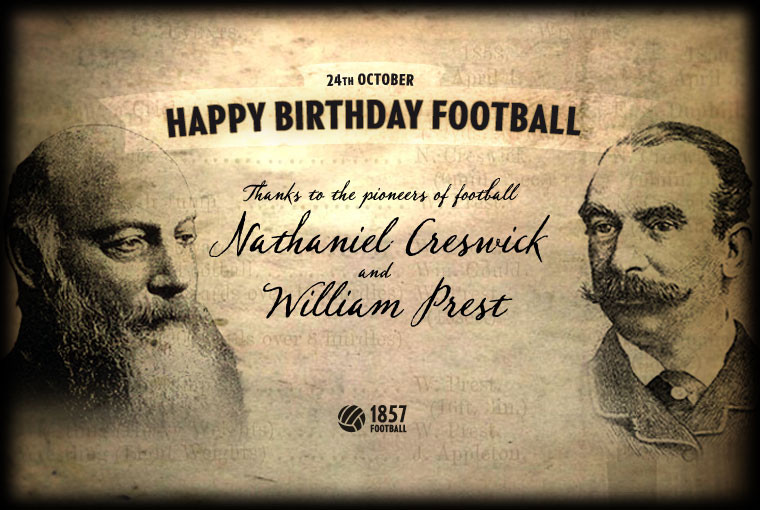 24th of October: Happy Birthday Football! In recognition of the 155th anniversary of the club and in memory of the founders, Nathaniel Creswick and William Prest, the Sheffield FC Foundation celebrates the pioneering spirit of football with fans, clubs and football associations from all over the world.

This event has now become “World Football Day” – one day for the global football community to remember and celebrate the pioneers and inventors of the game. 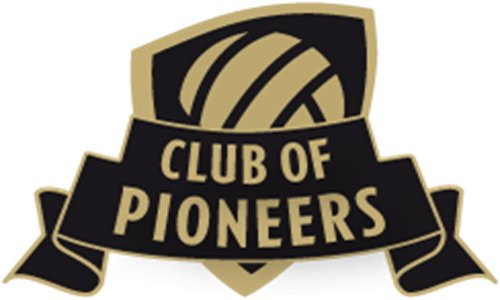